It’s not every day you have duck. It’s also not every day your boyfriend brings home the duck. While this meal was created during fall duck season, it could be beautifully re-created with frozen or store-bought duck any time of the year!

Soaking your duck breast in a brine will make it moist and tender. Leaving some skin on gives this pan-cooked duck a bit of fat to keep the meat from over-drying.

Clean the breast, leaving fat on one side. Mix the brine ingredients in a medium bowl. Brine for at least 2 hours and up to 1 day in the refrigerator.

Bake potatoes whole after poking holes in them with a fork. Typically, 45 minutes on 375F will do it. Allow potatoes to cool before cutting open. Scoop insides out and retain skins. In a medium size bowl, mash the potatoes with the sour cream and blue cheese. Re-fill the potato skins with the mashed mixture and top with shredded cheese. Bake again at 375F for 20 minutes while covered in foil. Remove foil and bake at 425F for 5 minutes or until cheese is golden brown. Remove and prepare to serve.

While the potatoes are baking, prepare the duck breast. In a large skillet, brown the breast 4-5 minutes on each side or until medium-rare (or longer, as  you prefer). Note that over-cooked game gets a “gamey” taste and is a common mistake in cooking game. Slice the duck breast to serve.

Plate the potato with a large bed of greens and top with duck breast. Dress with the vinaigrette and serve at a candle-lit table. 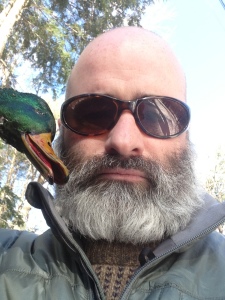